International English Language Testing System (IELTS)
Over 60 per cent of Nigerians who participated in a poll believe that the country should be included in the list of countries whose citizens are exempted from writing the IELTS exam when they want to study or work in the UK. The poll also showed that less than six per cent of Nigerians believe the IELTS for Nigerians should be left the way it is.
In the past few months, many Nigerians have called on the government of the United Kingdom (UK) to reform the policy of the English proficiency test, IELTS, in Nigeria.
While some demanded a reduction in the cost of the tests and an increase in the validity period, others demanded Nigeria’s removal from the list of countries required to take the test.
The International English Language Testing System (IELTS) is a major requirement for citizens of any country who wish to relocate to the UK for work or study opportunities.
The cost of the test in Nigeria ranges between N80,000 and N90,000 – an aspect which has prompted many Nigerians to describe the exercise as “extortion.”
Besides the cost, the test is only valid for two years and can only be taken in 12 cities across the country – another criterion many Nigerians have deemed unfair.
But while there has been a general call for a total reform of the IELTS policy, many Nigerians were particular about asking the UK government to include the country in its Visa and Immigration (VI) list, a poll conducted by PREMIUM TIMES shows.
Already, countries like Barbados, Guyana, the Bahamas and Belize are on the list which exempts their citizens from the IELTS. Other countries on the list are Antigua and Barbuda, Dominica and Grenada.
Following the social media attention that the issue generated, PREMIUM TIMES conducted a poll to test the views of Nigerians on the topic.
The poll, which ran on PREMIUM TIMES’ website and its official Twitter handle, lasted for five days. On Twitter and the website, it was conducted in a way that made it impossible for a respondent to vote more than once from the same computer or mobile device.
The voters were asked a single question: “What do you think should be changed about IELTS for Nigerians?”
On the Website, the question had five options for participants to choose from.
– Price should be reduced
– Validity period should be increased
– Price should be reduced and validity period increased.
– Nigeria should be added to the UKVI exemption list.
– IELTS for Nigerians should be left as it currently is.


Because Twitter allows only four options, the third option was not included.
A total of 2,125 respondents voted across the two platforms.
On the PREMIUM TIMES’ website, 1,468 people voted. About 60.2 per cent (884) of the respondents said Nigeria should be added to the UKVI list, while 18.9 per cent (277) said the price should be reduced and validity period increased.
Another eight per cent (117 respondents) said they only want the validity period increased while 7.7 per cent (113 respondents) only want the cost of the examination reduced. Only 5.2 per cent of the respondents (77) said the IELTS for Nigerians should be left as it currently is.
On Twitter, the respondents had only four options to choose from as allowed by the social media platform. A total of 657 participants voted. About 40.9 per cent of the respondents (269) called for Nigeria’s inclusion in the UKVI list, 32.1 per cent want the validity period extended, 24.2 per cent want the cost of the examination reduced while only 2.7 per cent said the IELTS should be left as it is for Nigerians.
While this is not the first time many Nigerians will be asking the UK to reform the IELTS policy in the country, the recent call, which started a few months ago, has been the most pronounced.
Nigerians are currently kicking against the policy, describing it as a rip-off and accusing the UK of commercialising the test. They have taken to social media using hashtags like #ReformIELTSPolicy, #IELTS, and #TOEFL, among others, to drive home their demands.
A youth-led open-source policy platform, Policy Shapers, is at the forefront of this call. The group has initiated an online petition on Change.org, wondering why none of the over 20 anglophone countries in Africa is on the list of countries exempted from taking the test.
This, they say, is “despite the fact that these African countries are former British colonies and belong to the Commonwealth.”
The petition, addressed to Secretary of the UK Home Office, Priti Patel, has been signed by over 70,000 people.
However, in its response to enquiries made as to why Nigeria is not on the UKVI exemption list, the criteria used for selecting countries and why Nigerians are subjected to the test, the UK Home Office, in charge of the test, said it had no evidence yet that majority of Nigerians spoke English as the first language.


It said it must have evidence that at least 51 per cent of the population speaks English as a first language for a country to be included in the list.
The UK High Commission had also said that while individual test providers set the fees, they are always comparable to what is charged globally.
When asked if Nigeria meets the target going by the fact that the majority are made to speak their indigenous languages while growing up, the founder of Policy Shapers, Ebenezer Wikina, noted that many countries on the UKVI exemption list have indegenous languages as well. 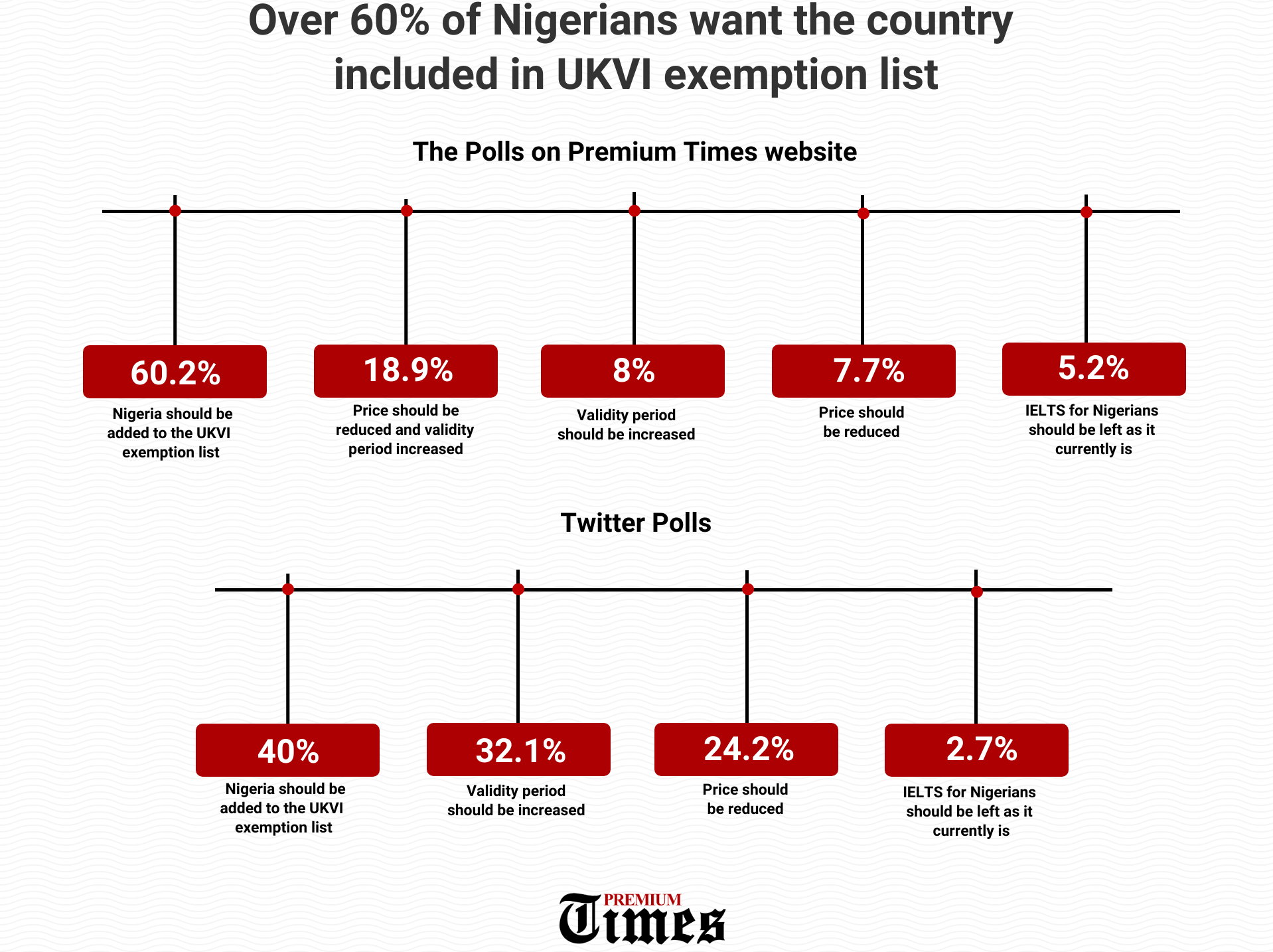 “We did some data mining and we found out that on that same list, the countries there, speak a combined 82 additional languages. People often refer to our indigenous languages as a reason why we should write the IELTs and so we just thought maybe they feel like our native languages corrupt our English so is it possible that their own languages corrupt theirs,” Mr Wikina said.
“Some countries like Guyana speak as much as 18 and it’s a very small island. So, why not us?
“There’s another data that shows that more than 60 per cent of Nigeria’s population is under 24 years old. We have a young population. If you call an average 24-year-old, most of them struggle to speak their indigenous language.”
Apparently, Nigerians are not the only ones calling on the UK to reform the IELTS policy.
Citizens of Ghana, Cameroon and Malawi have made similar calls.
On Saturday, Ghana’s second deputy speaker of parliament, Andrew Asiamah, mandated the parliament’s Education and Foreign Affairs Committee to look into the IELTS policy as it relates to Ghanaians.
His directive was sequel to a statement by a fellow lawmaker, who expressed the view that the test was being used as a source of revenue for the UK government.
The lawmakers, like Nigerians, had argued that Ghana is a Commonwealth nation and English is the official language of the state and the language of instruction in Ghanaian Schools.
Meanwhile, in Malawi, over 7,300 Malawians signed a petition asking the UK government to exempt them from taking the test before they can be accepted for studies in the UK.
A media practitioner, Rogers Siula, who launched the petition in 2021, told a local newspaper that the call was not only because English is Malawi’s official language, but also because the country was a former British Protectorate.
With over 70,000 signatures in Nigeria, many are hopeful that the IELTS policy in Nigeria will be reviewed.
Donate
TEXT AD: Call Willie – +2348098788999