More results…
More results…
EU, Irish nationalist and UK remainer observers continue to claim that the Northern Ireland economy is outperforming that of the rest of the UK and that the Northern Ireland protocol is therefore ‘working’. This claim is simply not supported by the available evidence, which points in the opposite direction. Moreover, the long-term costs of the protocol for Northern Ireland could be much higher than those seen so far. The UK government must not agree a deal with the EU that keeps the protocol substantially in place – as they appear minded to do.
The Northern Ireland Protocol has now become the subject of a campaign of economic disinformation. Over the last 18 months, opponents of Brexit and Irish nationalists have repeatedly claimed that the protocol has led to the Northern Ireland (NI) economy outperforming that of the rest of the UK and/or that the protocol has ‘shielded’ the NI economy from Brexit downsides. The latest example of this claim was by Irish Deputy PM Varadkar this week.
In fact, the evidence we have points largely in the opposite direction. The ONS data for gross value added for Northern Ireland shows that output dipped a little less than in Great Britain (GB) in 2020 during the covid lockdown and then recovered a bit more rapidly. But once the protocol came into force in January 2021, NI grew more slowly than in GB – by 5.5% from 2021 Q4 to 2022 Q2 compared to 7.5% in GB over the same period (see Chart 1). 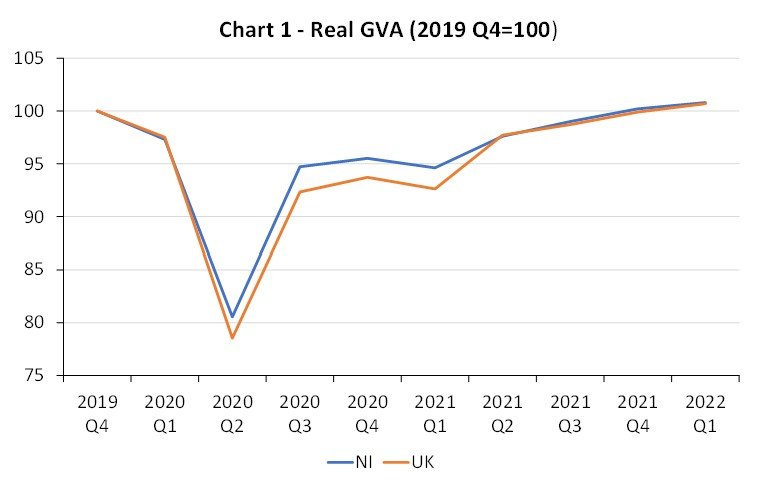 Source: ONS Model-based early estimates of regional gross value added (GVA) in the regions of England, Wales, Scotland, and Northern Ireland
Other evidence from high frequency indicators also shows NI underperforming within the UK. The composite PMI indices, which survey business activity, show growth in the Northern Ireland private sector consistently underperforming that in the UK as a whole since the start of 2021, when the protocol came into force. The underperformance has been particularly notable over the last four months during which the PMI surveys show Northern Ireland’s output contracting while that of the UK has continued to expand (see Chart 2). 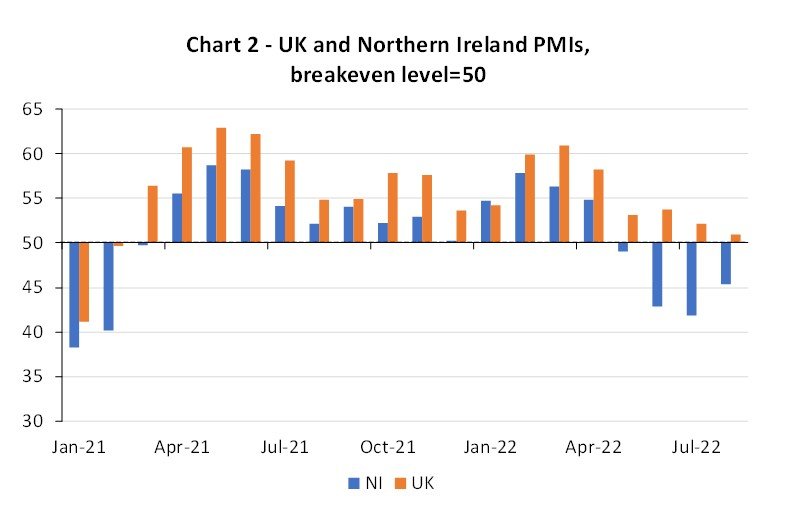 Source: Markit, Ulster Bank
The ONS’s regional trade data also contradict the idea that NI has either outperformed the rest of the UK or been ‘shielded’ from the effect of Brexit by the NI protocol. In the four quarters to June 2022, GB exports to the EU were 23% higher than in the four quarters to December 2020 (i.e. the period just before the protocol and TCA came in) compared to an 11% rise in NI exports to the EU. Part of the relatively strong GB export performance relates to exports of mineral fuels, but even if we strip these out, the picture is similar: GB exports to the EU up 14% from Q4 2020 to Q2 2022 while those in NI were up just 8% (Chart 3). The evidence therefore suggests NI has underperformed GB in terms of exports to the EU, despite the protocol – a particularly striking finding given that this is the main channel by which NI supposedly would have been ‘shielded’ from Brexit downsides. 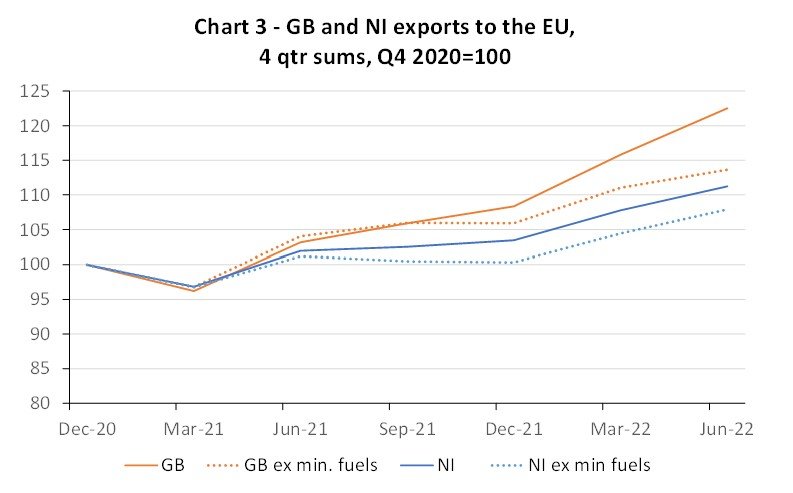 Source: ONS
Much attention has focused on Irish data apparently showing a large rise in imports from NI and (possibly) NI firms gaining market share in Ireland versus GB producers. We continue to be a bit sceptical about this data. Irish data has over the years consistently recorded much lower cross-border trade flows with NI than the data from NISRA in NI, and some of the recent recorded rise in Irish imports from NI may just reflect that gap closing due to higher ascertainment.
In addition, it is likely that a large chunk of the higher recorded Irish imports from NI is really goods from GB being re-routed via NI to dodge increased border bureaucracy at Irish ports. It is notable that a large share of the recorded rise in Irish imports is in just three ‘erratic’ sectors – medical/pharmaceutical, electric current and ‘unclassified’ items (Chart 4). The rise in medical/pharma imports (which alone is around a third of the total recorded rise in Irish imports from NI) is implausibly large given the modest scale of that industry in NI and is almost certainly re-routed GB goods. 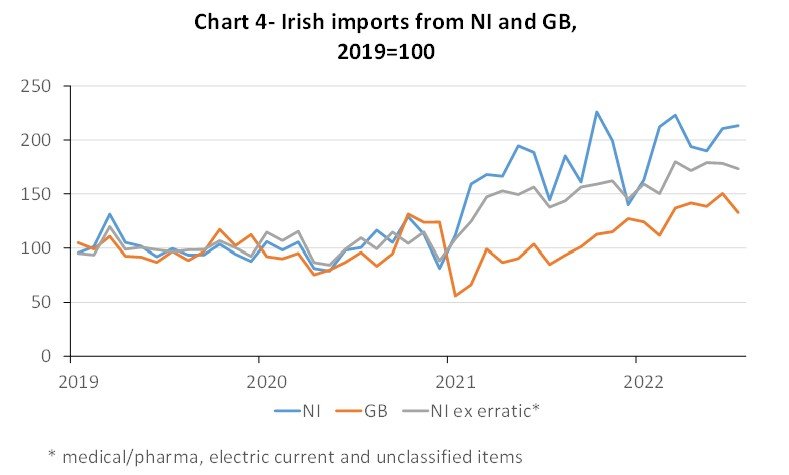 Source: Irish CSO
The employment record is equally disappointing. Up to the end of 2019, NI generated jobs at about the same rate as England or Wales and faster than Scotland. But NI experienced a larger loss of jobs during the pandemic. In the protocol period since the start of 2021, there has been a minor recovery in employment relative to GB but employment in NI remains well (4%) below its 2019 peak unlike GB where employment is closer to full recovery (Chart 5).
As well as the disappointing trends in key economic indicators shown above, there is also abundant evidence of the additional costs imposed on NI businesses by the protocol. The UK Financial Secretary to the Treasury recently emphasised the huge weight of new administration due to the protocol including more than ten thousand traders completing a million customs declarations thus far. A variety of NI sectors, especially in agriculture and horticulture have had major problems sourcing goods from GB, due to outright bans on GB produce entering NI, higher costs, or GB producers giving up supplying NI due to the administrative burden.
Imposing large administrative burdens on NI’s trade with its largest trading partner to preserve trade with a much smaller partner (the EU) never made any economic sense as we have previously argued. Claims that the protocol offers NI ‘the best of both worlds’ are neither supported by the emerging empirical evidence or serious modelling work. By far the best modelling work so far done is by the Fraser of Allander Institute. This study found that a fully-implemented protocol would in the long run increase the cost of GB imports in NI by 8% (a figure similar to estimates collected from individual businesses involved in NI trade) and lead to diversion of trade away from GB goods to more expensive ones sourced elsewhere. The increased costs for producers and consumers in NI would lead to a loss of competitiveness for NI firms and a loss of real income for NI consumers. The study’s estimate is that the long-term impact on the NI economy will be a loss of 2.5% of GDP – or around £1,600 per household. 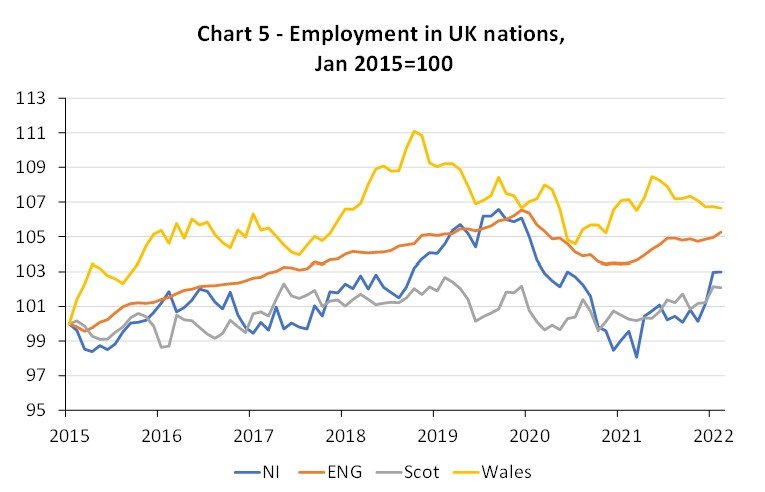 Source: ONS labour force survey
The only reason that the protocol has not already done far more damage to the NI economy is because it has not been fully implemented. Grace periods on movements of key goods like supermarket supplies have prevented what would have been a potentially very large negative economic shock (we have previously noted that some studies suggest Irish supermarket prices are up to 20% higher than those in NI).
But it would be foolish to conclude that a fudged situation, whereby these grace periods are made permanent, will allow NI to get a net benefit from the protocol. As we have shown, the NI economy already looks to be lagging that of the rest of GB and there are further long-term costs to come. NI will remain subject to EU product market regulations, some of which will damage its economic competitiveness, including on the crucial GB market. Regulatory divergence with the rest of the UK via regulatory changes in GB are likely to have a similar impact, as will the fact that NI will be substantially excluded from future UK trade deals by the terms of the protocol – deals that may for example open up new cheaper sources of inputs for GB producers.
In our view, the protocol is an unambiguous net economic negative for NI with the costs likely to rise steadily in the years ahead. As a result, it would be a huge error for the UK government to agree a deal with the EU on the protocol that leaves it substantially in place – as they now seem minded to do.
The EU may for example agree to scale down border checks on GB to NI trade in return for enhanced information on the nature of GB to NI trade flows – but generating that information will require all the current burdens of customs administration that GB and NI firms face to remain in place (costs that weigh especially heavily on smaller firms which are more common in NI). It will be a cosmetic, political change that will do nothing much to reduce the economic burdens created by the protocol. Similarly, a deal to prevent the (absurd) situation whereby GB steel exports to NI may face a 25% tariff would be welcome but would be pretty small beer economically. Only a root-and-branch reform of the protocol, along the lines previously set out by the UK government, will save NI from serious long-term economic damage – and potentially serious related social and political tensions.
A Decrease font size. A Reset font size. A Increase font size.
Subscribe to our podcast feed on Apple’s iTunes platform. 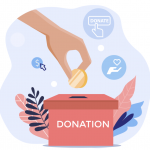 Choose Donation Amount
Briefings for Britain is financed only by contributors and supporters.
All donations will be used to strengthen or publicise the website. A monthly contribution helps ensure we can deliver articles regularly.
Copyright © 2020. Quality Website Design by Creative Monarchy – NIU Electric Transport. – Battery Recycling by Recover